This thread comes from the Karam Bales, National Executive at the NEU, writing in a personal capacity.
What happened to the Governments #fivetests?
What happened to contact tracing?
Has the gov completely abandoned the science and its own rules due to its inability to meet its own targets?

TEST 1. NHS capacity, we have the Nightingale wards, bed capacity is there, but do we have the staff for large patient numbers in Nightingales?
What are our ventilator numbers like?
TEST 2. Sustained fall in cases
ur government claims fewer people are testing positive, however, for 3 days they’ve stopped saying how many people are tested
Looking at figures only around 40k at most were tested, it appears cases in the community have started to rise.
25th May vs 20th May

Test 2. So deaths are falling but if cases have started rising then it will be a couple of weeks before this impacts the death figures and they start to rise.

Here’s a quick look I took at the testing figures and number of cases, heading in the wrong direction?

#Pressconference
Woah, what’s happened to UK testing?
Below 74k, yet no total number of how many people have been tested?#COVID19 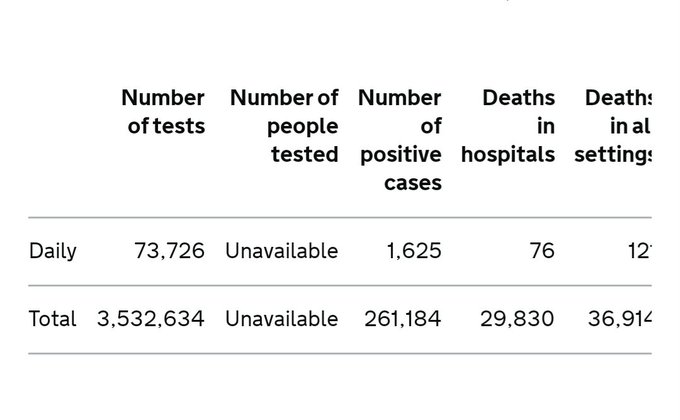 TEST 3: Rate of infection down across the board
RO estimated around 0.7-1.0
Notice Johnson said yesterday RO is not above 1, is this an attempt to change terms of test 3?
RO is not down across the board with a hospital shutting to new patients yesterday. Testing enough to know RO?  They solved the increased demand for PPE with education settings increasing student numbers by just saying that there is no need for PPE.
Do other sectors like NHS and care homes have enough PPE now?

Test 4: Operational measures like testing and PPE in place

PPE? I don’t know on that one, supply lines might all be in place

Testing? Johnson promised 200k test daily within 6 days, for past 3 days our government won’t even tell us how many people have been tested

Despite Hancock’s target and all the fanfare around the end of April, Government has never tested 100k people on ANY day and they have played many games to inflate the figures
Counting swabs posted not tested
Counting lab tests that don’t diagnose ppl, 30k in one day. Then there’s the fact they are counting one person’s throat and nose swab as two separate tests. Many of these are coming back as inconclusive, they are still counted towards the figures. The numbers on testing are actually heading in the wrong direction
TEST 5: The most important test according to government, to prevent a second peak, however, they already changed the terms to ‘not overwhelming the NHS’ so I guess that means until the Nightingale wards are full? However, not all areas like WSM have Nightingales
What have the SAGE papers released said about this?
Effective contact tracing must be well established before lockdown measures are eased
We clearly don’t have the testing capability in place, do we have evidence Serco will have their contact tracers in place within 6 days? What about the app? Remember originally this was going to be the vital piece of the testing puzzle, but now the timetable has been pushed back its importance is being downplayed.
SAGE said easing lockdown without contact tracing has a very real risk of causing a second peak. SAGE also said easing lockdown without causing a second peak was conditional on maintaining a high level of adherence to social distancing.
VE day, street parties, parks and beaches?
How has social distancing been working in the past few days in general?
Yet despite the two most important conditions to prevent a second peak according to SAGE not being met, Johnson has confidently said that everything is fine to start increasing student numbers in 6 days time? What is he basing this massive assumption on?
SAGE had many concerns on schools pushing RO above 1 and triggering a second peak, the conditions they required to do this safely have not been met, in fact, the government guidance goes directly against the SAGE recommendations
A full breakdown of the science here

According to SAGE the most important way of keeping infections coming down is to not increase student numbers until contact tracing is well established
The government is not following the science#Pressconference #dailybriefings #pressbriefing #edutwitterhttps://theteacherist.com/2020/05/23/sage-isage-and-schools/ …

Sage, iSage and Schools – The Teacherist

This thread comes from the Karam Bales, National Executive at the NEU, tweeting in a personal capacity. SAGE have just released papers on schools.Not a huge amount(well as much as I wanted)however it…

The final decision date for schools was supposed to be 28th May when they would check their #fivetests, however, they already seem to have made the decision without meeting their own tests, they are going to fudge the stats or just bin their own tests to carry on regardless
If the government had got its act together over testing and other measures months ago we could have pushed infections right down. If the government had also properly engaged with unions and had the same school measures as Denmark or any other countries we are looking at a safe sensible increase of student numbers and other easings of lockdown next week. Unfortunately, our government hasn’t done its job properly and this feels much like an inverse of the start of March, pure short-sighted focus on immediate economics without considering the long term consequences.

This site uses Akismet to reduce spam. Learn how your comment data is processed.